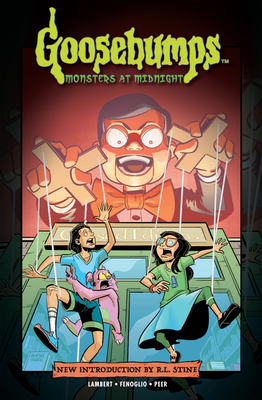 
Usually Ships in 1-5 Days
The kid-friendly horror series that defined a decade returns to comics, for the first time with all-new stories! Reader beware, you're in for a scare!

So you say you want Goosebumps comics? Well, Be Careful What You Wish For, or you'll end up in Deep Trouble. Sure, you say, "You Can't Scare Me!" now, but wait 'til I tell you Why I'm Afraid of Bees. But where are my manners? Please, come in. Welcome to Dead House.

Brave the spine-tingling world of R.L. Stine to uncover the thrills and chills of the first ever Goosebumps comic series to feature original stories! In Vol. 1, writer Jeremy Lambert and artist Chris Fenoglio kick things off with a new creepy carousel spin on HorrorLand! When Mia and Ginny go to stay at their Grandma's mothball-filled house for the summer, boredom forces them to venture out into her tiny town. But, soon, what appears to be a dusty used bookstore plunges them into an upside-down world of terror!
Jeremy Lambert is a writer of comics and screenplays. Originally from Bowie, Maryland, he now resides in Los Angeles. Once upon a time, he was an extras casting director for La La Land, Agents of Shield, Furious 7, True Detective, and Magic Mike, among other films and television shows. He believes there are few things in life better than a nice pair of socks.

When he's not watching entirely too much Star Trek, Chris Fenoglio is an artist, colorist, designer, and teacher of all things comic book. He can also muddle around enough on guitar to only be mostly annoying. He has worked on big franchises like X-Files and Orphan Black, as well as his personal projects, such as his webcomic Chris & Christina. He lives in Alexandria, VA with his wife (who also watches a lot of Star Trek.)
"Goosebumps: Monsters at Midnight is an awesome way to introduce horror to a younger audience. It's an all-ages title so there is something for kids and adults alike. Fans of the original young adult books by R.L. Stine will absolutely love this comic. It makes me want to dig up my old books to revisit them." –Horror Talk