The Girl and the Glim (Paperback) 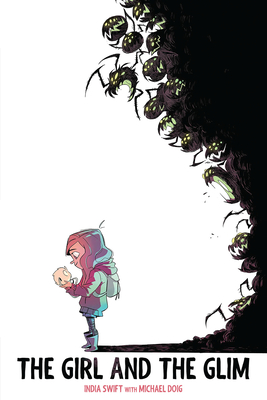 The Girl and the Glim (Paperback)


Usually Ships in 1-5 Days
An original graphic novel about being the new kid in a different school, getting picked on by the class bullies, and what happens when a magical presence takes notice.

Starting out at a new school is tough, and Bridgette isn't having much luck, seeing as, well, she's not great at making a first impression. Or, maybe, any impression. For now the best she can manage is... awkward.

That’s when they appear. Creatures dark and scary… Creatures only she can see. But if she can’t even face down the school bullies, how is she supposed to overcome literal monsters? Well, Bridgette is going to have to figure it out fast, because she might just be her town’s only hope.

The Girl and The Glim is about accepting the fact that fear is okay, and that while letting other people see your vulnerabilities can be scary, it can also lead to closer friendships in the end.
India Swift is an animator and storyteller currently living in Dublin, Ireland. Born in England and raised by parents who both worked as theater designers, she fostered a love of storytelling from an early age and exercised that whenever she could in her artwork. An avid comic lover, she grew up on Fleetway's Sonic the Comic, and spent much of her childhood drawing comics of her own for fun. Once bitten by the comic bug, there was no escape, and even now she often pens short stories and comics with her partner Michael, a colorist. After working in studios for a few years while making short form comics in her spare time, India decided to take a break and try creating her first graphic novel, The Girl and the Glim. Nowadays, she balances working as a director and animator with Knights of the Light Table with creating comics and continuing the story of Glim! She aspires to create work with a sincerity at its heart that affects and inspires others, leaving a lasting impact and a positive, affirming message.

Michael Doig is currently the Colour Wizard at Knights of the Light Table, where he's provided artwork for the colour design, background illustration, colour grading, and compositing for Knights' renowned projects, the music videos for Starlight Brigade and Magnum Bullets. He is a colourist foremost, but he's spent years developing skill sets that have seen him through a career in game art, comics, and animation. His work in comics include colour assisting Matias Bergara on Boom Studios' Coda, and he's bringing this knowledge with him as colourist for The Girl and the Glim. He likes cats, and he has a penchant for bears.
"Swift's stylized, warm figure designs are in compelling contrast to the creepy Glums, and her action sequences are well-paced and cinematically rendered in dynamic splash pages and clearly choreographed fight scenes... Engrossing and entertaining." —Booklist, starred review

"Bullying and the pressure to get good grades are central themes in The Girl and the Glim, a fantasy adventure that’s ripe for Pixar-style animation treatment." —Foreword Reviews

"The high-volume color palette shouts excitement and adventure, with neon highlights underscoring an already bright series of pinks and blues." —The Bulletin of the Center for Children's Books