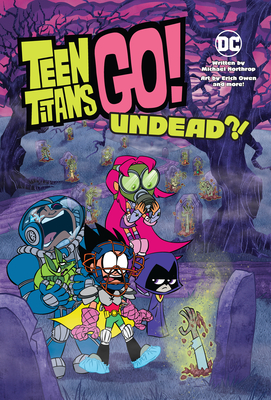 
Usually Ships in 1-5 Days
Jump City is full of strange, shambling creatures muttering about sales and dead-set on brains. The Teen Titans saw a comet fall from the sky and can think of nowhere better to hang out and see what happens than the mall. If their theory is correct and people start turning into zombies, they want to be prepared—and we all know zombies love the mall!

But as the situation grows ever more dire, Robin and his team take to the streets, trying to save the city from the bargain-hungry undead. But those zombies really bite: the cemetery isn’t safe, the H.I.V.E. Five are not alive, and his teammates are about to succumb to shopping fever!

Can Robin keep it together long enough to cancel this apocalypse?

Michael Northrop is the New York Times bestselling author of Scholastic's new multi-platform series, TombQuest. His first young adult novel, Gentlemen, earned him a Publishers Weekly Flying Start citation, and his second, Trapped, was an Indie Next List selection. His first middle-grade novel, Plunked, was named one of the best children's books of the year by the New York Public Library and was selected for NPR's Backseat Book Club. He is originally from Salisbury, Connecticut, a small town in the foothills of the Berkshire mountains, where he mastered the arts of BB gun shooting, tree climbing, and field goal kicking with only moderate injuries. After graduating from NYU, he worked at Sports Illustrated Kids magazine for 12 years, the last five of those as baseball editor.

Erich Owen is a cartoonist living in San Diego. His first graphic novel series, Mail Order Ninja, which he co-created and illustrated, was published in 2005. Since then, he's been drawing all kinds of comic book projects! Currently, he draws TEEN TITANS GO! and BATMAN: NIGHTWATCH for DC Comics.