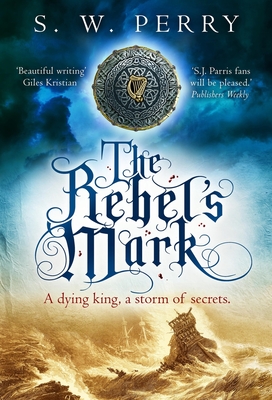 This is book number 5 in the The Jackdaw Mysteries series.

The fifth gripping mystery in this Elizabethan crime series from S. W. Perry sends Dr Nicholas Shelby and his wife, Bianca, from London to the heart of wild Ireland, where a storm of rebellion and corruption threaten all hope of peace.

Elizabeth's reign is reaching its winter and England's old adversaries are fading. But in a world on the brink of change, showing any weakness can be fatal...

1598. Nicholas Shelby, unorthodox physician and reluctant spy for Robert Cecil, has brought his wife Bianca and their child home from exile in Padua. Welcome at court, his star is in the ascendancy. But he has returned to a dangerous world.

Two old enemies are approaching their final reckoning. England and Spain are exhausted by war. In London, Elizabeth is entering the twilight of her reign. In Madrid, King Philip of Spain is dying. Perhaps now is the time for one last throw of the dice.
S. W. Perry was a journalist and broadcaster before retraining as an airline pilot. He lives in Worcestershire with his wife.
★ “Vivid characters and spot-on period details complement the intricate whodunit plot, and Perry convincingly evokes the religious tensions of the day.” —Publishers Weekly, starred review of The Heretic's Mark

"A real page-turner. Hell, threat and madness abound in this desperate flight from the dangerous, dark streets of Elizabeth's Protestant London to the vivid heart of Galileo's menacing Catholic Italy." —Minette Walters on The Heretic's Mark
"The writing is of such a quality, the characters so engaging and the setting so persuasive that S.W. Perry's ingeniously plotted novels have become my favourite historical crime series." —S. G. MacLean on The Serpent's Mark
"The third in Perry's series is as dramatic and colourful as the previous two." —Sunday Times, praise for The Saracen's Mark
"An absolute belter of a read and another fabulous addition to the Jackdaw Mysteries series... I just gobbled up the pages as the story fairly roars along battling spies and pirates on route... S. W. Perry ensures the sights, smells and sounds of London and Morocco entered my very being. I love this series." —Liz Robinson, LoveReading, Picks of the month, praise for The Saracen's Mark
"No-one is better than S. W. Perry at leading us through the squalid streets of London in the sixteenth century." —Andrew Swanston on The Serpent's Mark
"The Serpent's Mark is an excellent evocation of Elizabethan England, with espionage, intricate conspiracies, strange medical practises and a gripping story. A rattling good read." —William Ryan on The Serpent's Mark