Start Me Up and Keep Me Growing: Management Learnings from the Rolling Stones (Paperback) 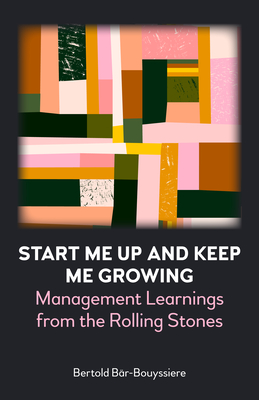 Many people know the Rolling Stones, their famous songs, their industrial-scale concerts, and their enormous wealth. However, what looks like a straightforward career path was in fact fraught with many threats and obstacles. There were many dramatic incidents where the Rolling Stones were on the verge of extinction, and there was the constant risk of becoming obsolete. However, through an infinite sequence of wise business decisions, artistic and commercial adjustments, and unbelievable painful efforts to overcome the centrifugal forces inherent in multi-person long-term interpersonal dynamics, the Stones became the greatest societal influencers of the post-war world, inspiring several generations as a model for perseverance, effort, creativity, and fun.

This easy-to-read book, inspired by the Harvard Business School Case Study format, narrates the band history with a focus on business aspects, management learnings and the interpersonal dynamics that repeatedly threatened to end the greatest success story of rock 'n' roll, but eventually culminated in an unrivalled planetary success.

The short book is aimed at company founders, talent managers in large corporates and executive coaches, who seek inspiration for their own workplace, want to hear how the Stones made it, while still enjoying a good read.