The Rohingyas: Inside Myanmar's Genocide (Paperback) 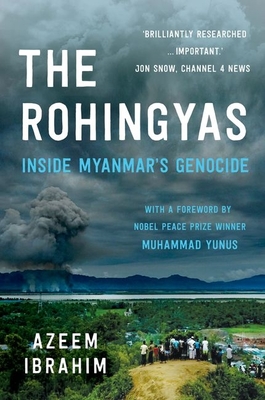 The Rohingyas: Inside Myanmar's Genocide (Paperback)

According to the United Nations, Myanmar's Rohingyas are one of the most persecuted minorities in the world. Only now has the media turned its attention to their plight at the hands of a country led by Nobel Peace Prize laureate Aung San Suu Kyi. Yet the signs of this genocide have been visible for years.
For generations, this Muslim group has suffered routine discrimination, violence, arbitrary arrest and detention, extortion, and other abuses by the Buddhist majority. As horrifying massacres have unfolded in 2017, international human rights groups have accused the regime of complicity in an ethnic cleansing campaign against them. Authorities refuse to recognise the Rohingyas as one of Myanmar's 135 "national races," denying them citizenship rights in the country of their birth and severely restricting many aspects of ordinary life, from marriage to free movement.
In this updated edition, Azeem Ibrahim chronicles the events leading up to the current, final cleansing of the Rohingya population, and issues a clarion call to protect a vulnerable, little known Muslim minority. He makes a powerful appeal to use the lessons of the twentieth century to stop this genocide in the twenty-first.

Azeem Ibrahim has a PhD from the University of Cambridge. He has been a Research Fellow with the International Security Program at the Kennedy School of Government at Harvard, a World Fellow at Yale, Fellow and member of the board of directors at the Institute for Social Policy Understanding, and an Adjunct Research Professor at the Strategic Studies Institute, US Army War College. He founded and chairs a private grant-giving foundation (www.ibrahimfoundation.com) focusing on innovative community projects, and served as a reservist in the UK's 4th Battalion Parachute Regiment.