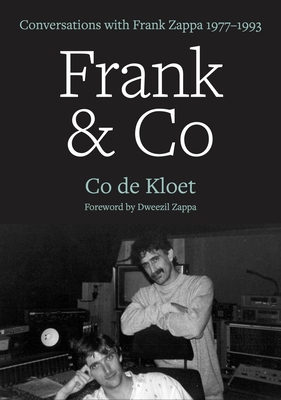 “With this book, the Zappa fan will get a glimpse into Frank that I don’t believe any other book written by him or about him expresses. And us Zappa fans love that. Thank you, Co.” - Steve Vai

“I think the best way to start when somebody says something can’t be done, just look at them and say: why not?” - Frank Zappa, Los Angeles, 1990

Co de Kloet and Frank Zappa were friends for many years, and during that time Co recorded nearly every conversation the two men had. They also corresponded frequently—about life, music, politics, and much more besides—and this book offers a unique chronicle of their friendship, from their first meeting in 1977 to Zappa’s death in 1993.

Co is renowned as an expert on Zappa’s music, but this book is about far more than that, and is unlike any other collection of interviews. As his son Dweezil writes in his foreword, Frank was a reluctant and sometimes combative interviewee, yet his conversations with Co were open and wide-ranging.

Through more than two decades of these discussions, Frank & Co reveals a thoughtful, sensitive, and expansive Zappa, offering readers new insights into the life and career of one of the great masters of twentieth-century American music. It also includes Co’s favourite memories of Frank, as well as interviews with Zappa alumni Flo & Eddie, Jimmy Carl Black, Pamela Zarubica, and Don van Vliet, aka Captain Beefheart.

Co de Kloet is a musician, composer, producer, and radio personality who works for Dutch public broadcaster NTR and the Conservatorium van Amsterdam. Known in the trade as the “Creative Catalyst,” he also runs his own media company, Zivasound. He lives with his wife and two children in Kortenhoef, a tiny village in Holland that a famous painter once described as the centre of the world.

"Personally I’m a voracious reader of all Frank Zappa’s interviews or conversations as I never fail to learn a lesson from his wisdom uncanny ability to cut through any B. S. deliver the truth, usually in the most humorous manner! Actually, I forgot that in 1977 I was in front of a Pulitzer Hotel elevator with Co de Kloet, who later was my Creative Catalyst during my Chamber Works orchestra project. I am glad that he documented this in his book Frank Co, which contains a lot more unique information about my friend and former employer Frank Zappa. I heartly recommend it to any Zappa fan and other connoisseurs of good music!"

"It is a fascinating book, one that shows the different sides to Zappa. At times it feels like you are eavesdropping."—Aaron Badgley, Spill Magazine