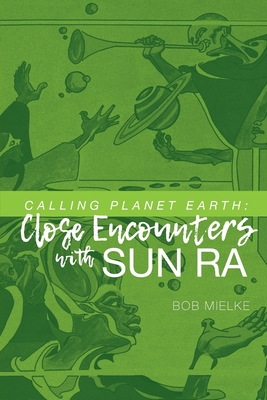 Calling Planet Earth: Close Encounters with Sun Ra pulls us into the quirky world of the jazz
musician known first as Herman Blount, then as Sun Ra (1914-1993), the Arkestra leader
who claimed for most of his life to have come from Saturn. The book opens with an
introduction to Ra's "sub-underground" music, a sound which fascinated the author and
turned him into a fan almost fifty years ago. Introductory sections set up key questions, like,
"But is it Jazz?" and "Where is Sun Ra Coming From, Besides Saturn?" How did a black kid
from Birmingham, Alabama, wind up proclaiming himself a Pharoah? After the introduction
comes Mielke's play, Discipline 27-II: A Cosmo-Drama in Two Acts. That's followed by a
thorough analysis of an enormous number of recordings, starting in the 1930s and continuing
for the rest of his life. Posthumous releases form a separate chapter. (Most of the
introductory material and analysis of recordings originally appeared in Mielke's 2013
Adventures in Avant Pop, though it has been updated.)

In the play Discipline 27-II, which premiered in St. Louis, MO in 2015, Mielke makes Sun
Ra's claim to have come from outer space not an artist's Afro-futurist proclamation but a
statement of fact. The cast includes Saturn Aliens, a NASA official, and Gaia the Earth
Goddess--all watching an elaborate Sun Ra concert. Ra's actual life story is dramatized in
short scenes against this concert background. We see him growing up as Herman Blount in
Birmingham, Alabama, and bantering with the racist judge who sent him to prison for refusing
to serve in the Army in 1942. We see him recruiting, teaching, and sheltering the musicians
who became--and still are--the Arkestra. We watch Space Aliens as they comment on
racism, estrangement, and music as healing. Scenes in a bar, in a strip club, a recording
studio, are watched by observant aliens and NASA interrogators as well as by the play's
audience--and the cumulative effect is respectful of the man who says he's "Mister Ra, ...
Mister E, but most of all, Mister Mystery." Sun Ra claimed that his true nature was cosmic,
that he had come to enlighten Earth and to teach peace. He and the Arkestra became known
for futuristic costumes, musical experimentation, and performance art. The play's notes
includes extensive comments on costume options, sets, and performance alternatives--even
a recipe for "Moon Stew," to be served or sold at the concession stand twenty minutes before
the play starts. Audience involvement in Discipline 27-II begins immediately, in the theater
lobby where Arkestra members sit at random tables doing improvised riffs of increasing
intensity. It continues as we listen in on conversations about philosophy and ethics and
music, and watch exotic dancers and amazing singers and space aliens interact.