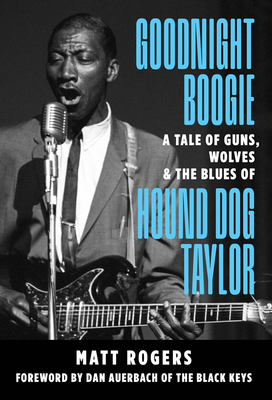 Hound Dog Taylor made guitars howl and hips shake. A founding father of lo-fi blues rock—that gritty, stripped-down sound played on cheap guitars with no bass—Taylor and his band The HouseRockers played loud, wild gut-bucket boogie that was raw and ferocious, earning them a reputation as “The Ramones of the blues.” Though his influence continues to be heard in the music of contemporary musicians such as Jack White, The Black Keys, and others, Hound Dog Taylor’s story has never been fully explored. Off stage, his life was as wild as his music. From his childhood in 1920s Mississippi to his final years in 1970s Chicago, he was surrounded by racism, crime, and violence. The threat of bloodshed was constant, whether from the Ku Klux Klan, South Side gangs, or even fellow musicians. From drunkenly slicing off his sixth finger with a straight razor, to becoming the artist whose music launched the now-legendary Alligator Records, Goodnight Boogie is the first in-depth biographical study of the Blues Hall of Famer whose life was as compelling as his music. This is the story of a brilliant and unforgettably original musician who struggled for success while fighting to survive. Foreword written by Dan Auerbach of The Black Keys.

Matt Rogers is an award-winning writer and musician who started his career in journalism, focusing primarily on music. He went on to work in advertising, eventually becoming a creative director at an internationally-recognized agency, while continuing to pursue his musical passions. He currently lives in Toronto, where he completed his first book, Goodnight Boogie.