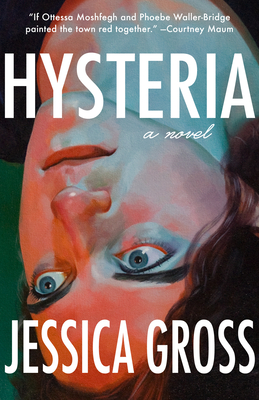 
Usually Ships in 1-5 Days
One of The Observer's Five Most Anticipated Debuts of August One of Refinery29's Best Books of the Summer One of Lit Hub's Best New Books of the Summer One of The Millions' Most Anticipated Books of August In HYSTERIA, we meet a young woman an hour into yet another alcohol-fueled, masochistic, sexual bender at her local bar. There is a new bartender working this time, one she hasn't seen before, but who can properly make a drink. He looks familiar, and as she is consumed by shame from her behavior the previous week-- hooking up with her parents' colleague and her roommate's brother-- she also becomes convinced that her Brooklyn bartender is actually Sigmund Freud. They embark on a relationship, and she is forced to confront her past through the prism of their complex, revealing, and sometimes shocking meetings. With the help of Freud--or whoever he is--she begins to untangle her Oedipal leanings, her upbringing, and her desires. Jessica Gross's debut is unflinchingly perceptive and honest, darkly funny, and unafraid of mining the deepest fears of contemporary lives.
Jessica Gross's writing has appeared in The Los Angeles Review of Books, The New York Times Magazine, and The Paris Review Daily, among other places. She holds an MFA in fiction from The New School, a Master's degree in cultural reporting and criticism from New York University and a Bachelor's in anthropology from Princeton University. She has received fellowships in fiction from the Yiddish Book Center (2017) and the 14th Street Y (2015-16), where she also served as editor of the LABA Journal. She currently teaches writing at Eugene Lang College at The New School. Hysteria is her first novel.