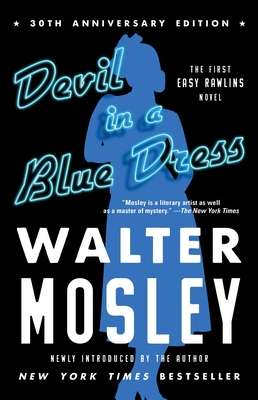 This is book number 1 in the Easy Rawlins Mystery series.

The first novel by “master of mystery” (The New York Times) Walter Mosley, featuring Easy Rawlins, the most iconic African American detective in all of fiction. Named one of the “best 100 mystery novels of all time” by the Mystery Writers of America, this special thirtieth anniversary edition features an all new introduction from the author.

Easy Rawlins, a black war veteran, has just been fired from his job at a defense factory plant. Drinking in his friend’s bar, he’s wondering how he’ll manage to make ends meet, when a white man in a linen suit approaches him and offers him good money if Easy will simply locate Miss Daphne Money, a missing blonde beauty known to frequent black jazz clubs.

Easy has no idea that by taking this job, his life is about to change forever.

“More than simply a detective novel…[Mosley is] a talented author with something vital to say about the distance between the black and white worlds, and with a dramatic way to say it” (The New York Times).
Walter Mosley is the acclaimed author of forty-three books, including the internationally bestselling Easy Rawlins series. His best known Easy Rawlins novels include Devil in a Blue Dress, A Red Death, White Butterfly, Black Betty, and Little Yellow Dog. He is also the author of the collection of stories Always Outnumbered. Always Outgunned featuring Socrates Fortlow, which was the basis for an HBO feature film. A former president of the Mystery Writers of America, he was named a grand master by the organization in 2016. He has served on the board of directors of the National Book Foundation and is a recipient of the PEN American Center Lifetime Achievement Award. A native of Los Angeles, he now lives in New York City.

“Mosley is a literary artist as well as a master of mystery.” —The New York Times

"Richly atmospheric...Devil in a Blue Dress honors the hard-boiled tradition of Hamett/Chandler/Cain in its story line line and attitude, but Mosley takes us down some mean streets that his spiritual predecessors never could have...A fast moving, entertaining story written with impressive style. This kind of book that leaves you yearning to read more about Easy Rawlins' adventures."
— Los Angeles Times Book Review

"The social commentary is sly, the dialogue is fabulous, the noir atmosphere so real you could touch it. A first novel? That what they say. Amazing. Smashing."
— Cosmopolitan

“Crackles with the suspense and wit of vintage Raymond Chandler and Dashiell Hammett, but its keen commentaries on racial issues make it a vital piece of modern fiction…Mosley has earned a place among contemporary masters of crime fiction.”
— Boston Sunday Herald